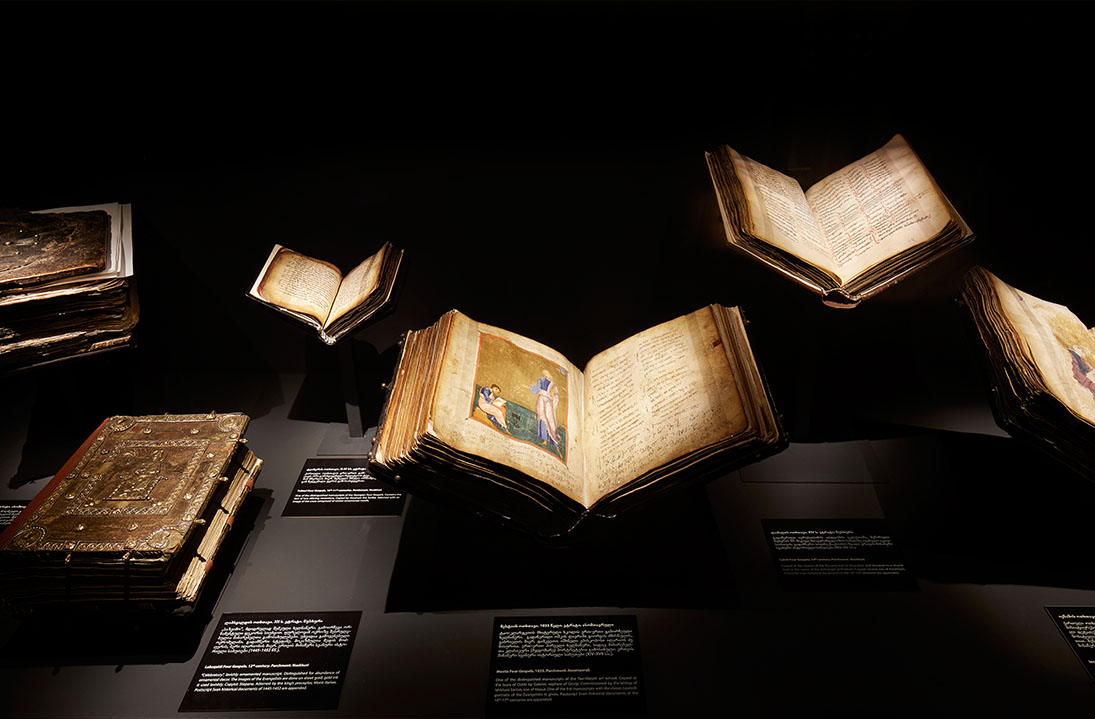 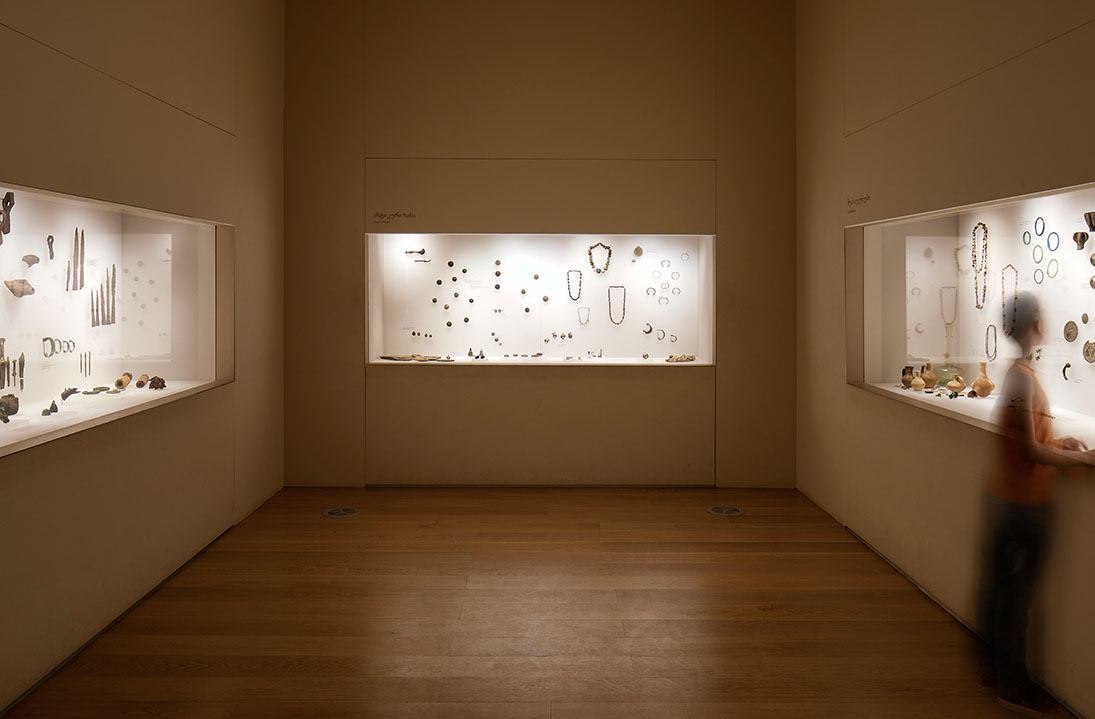 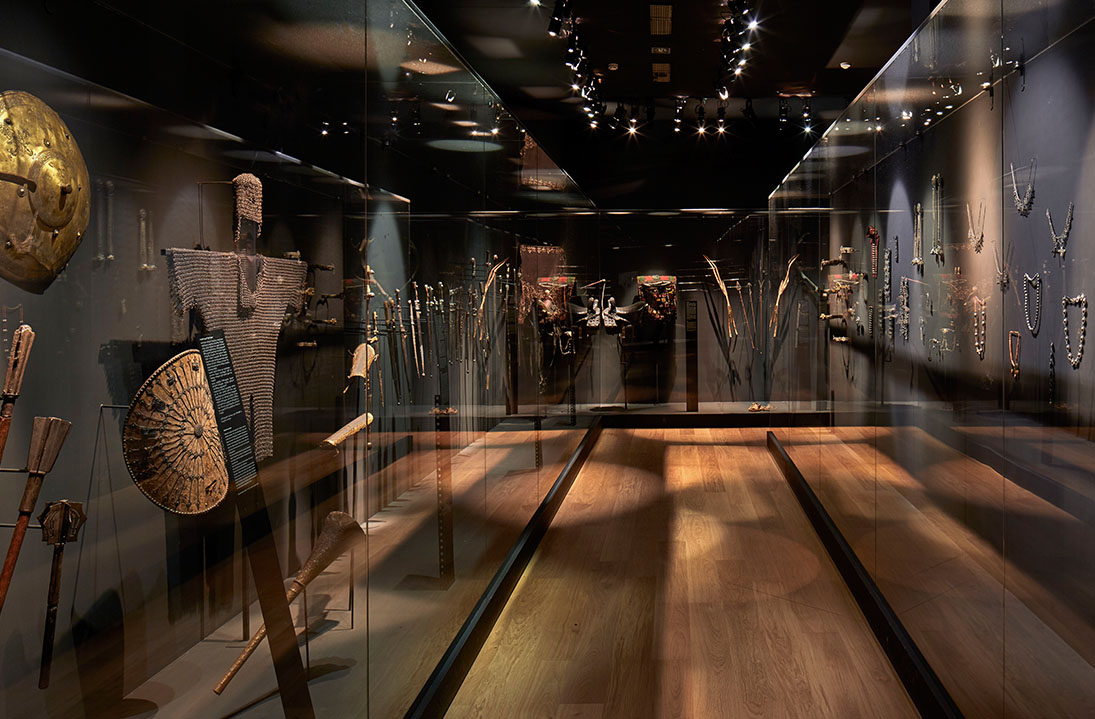 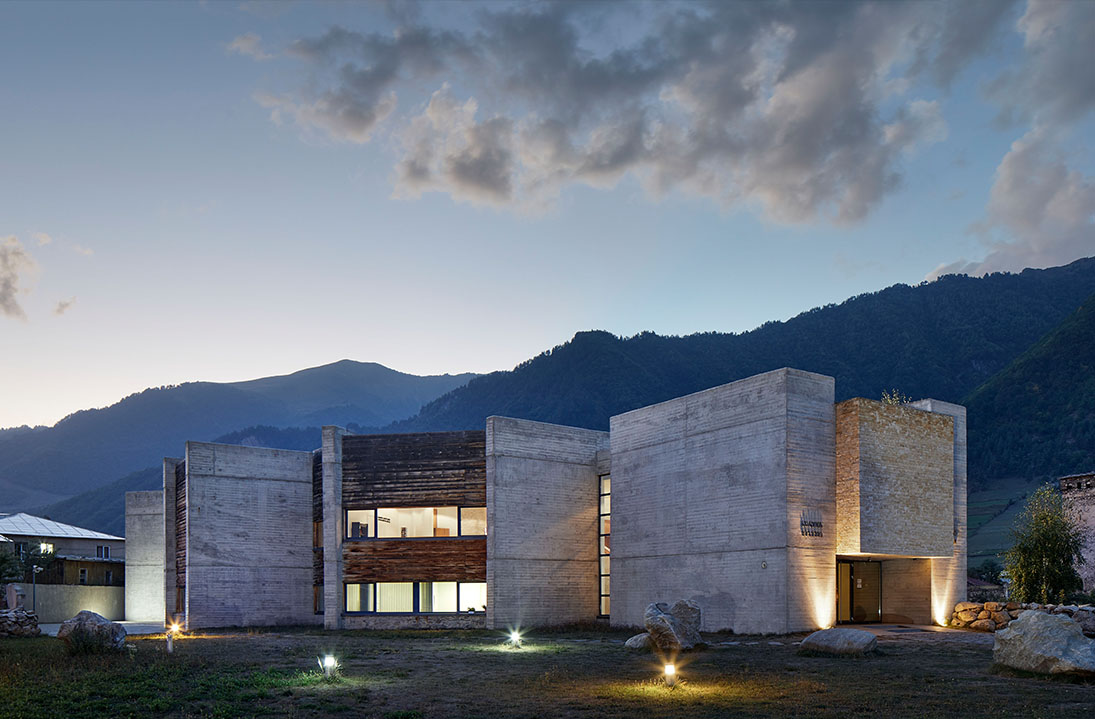 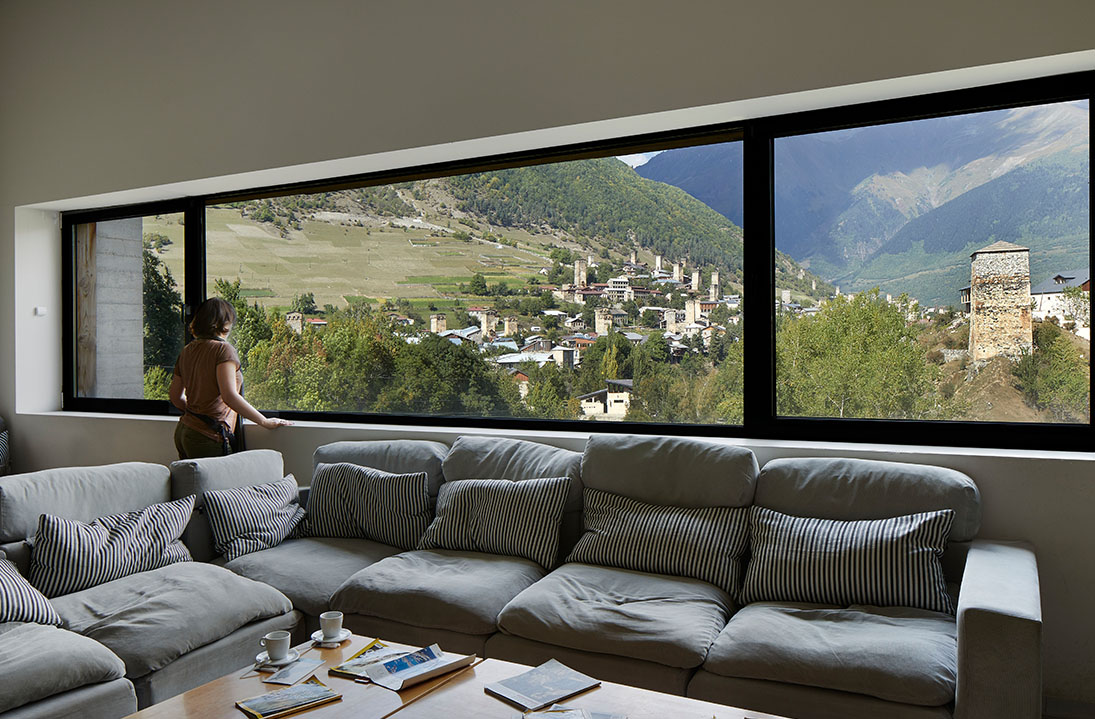 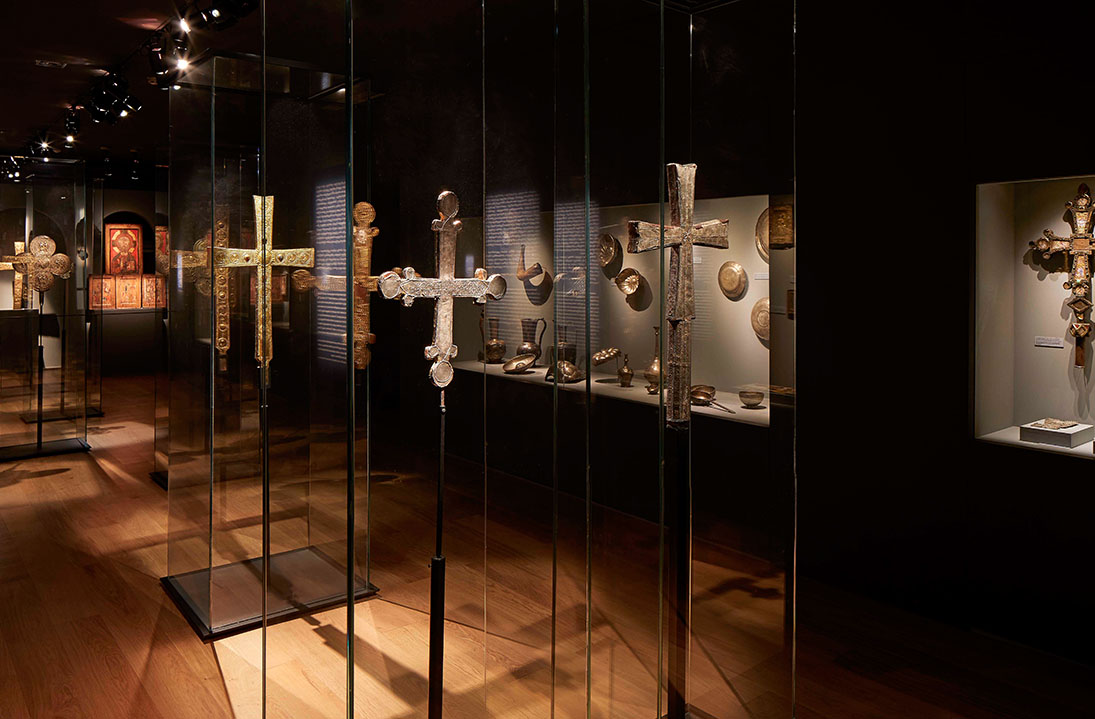 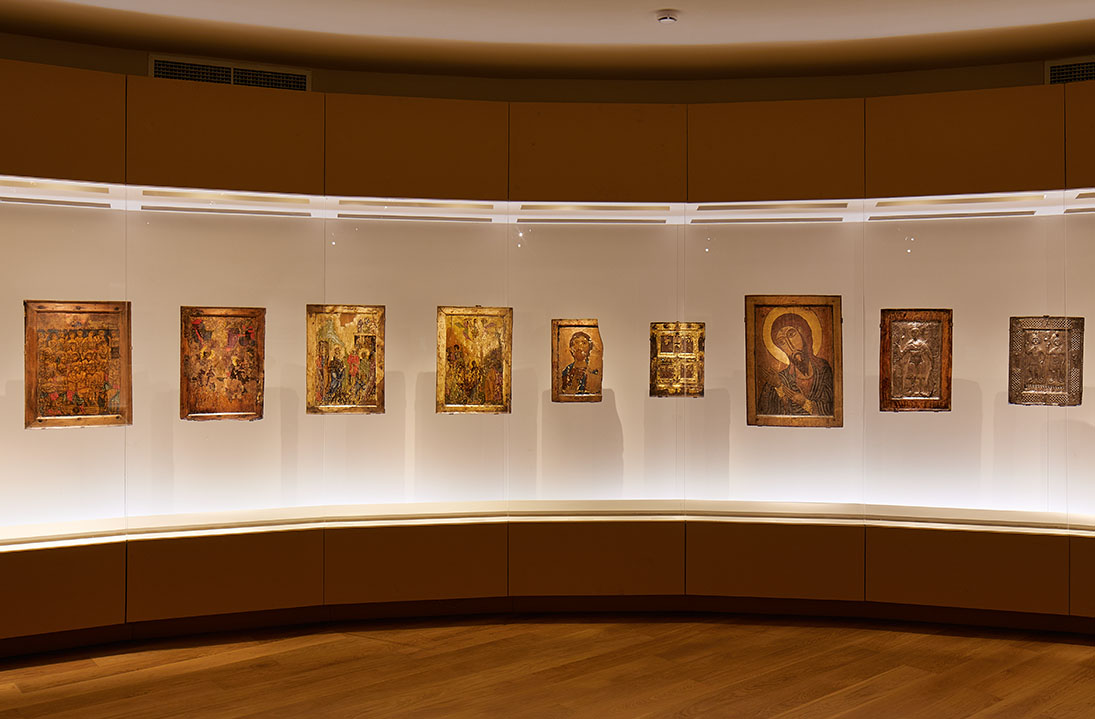 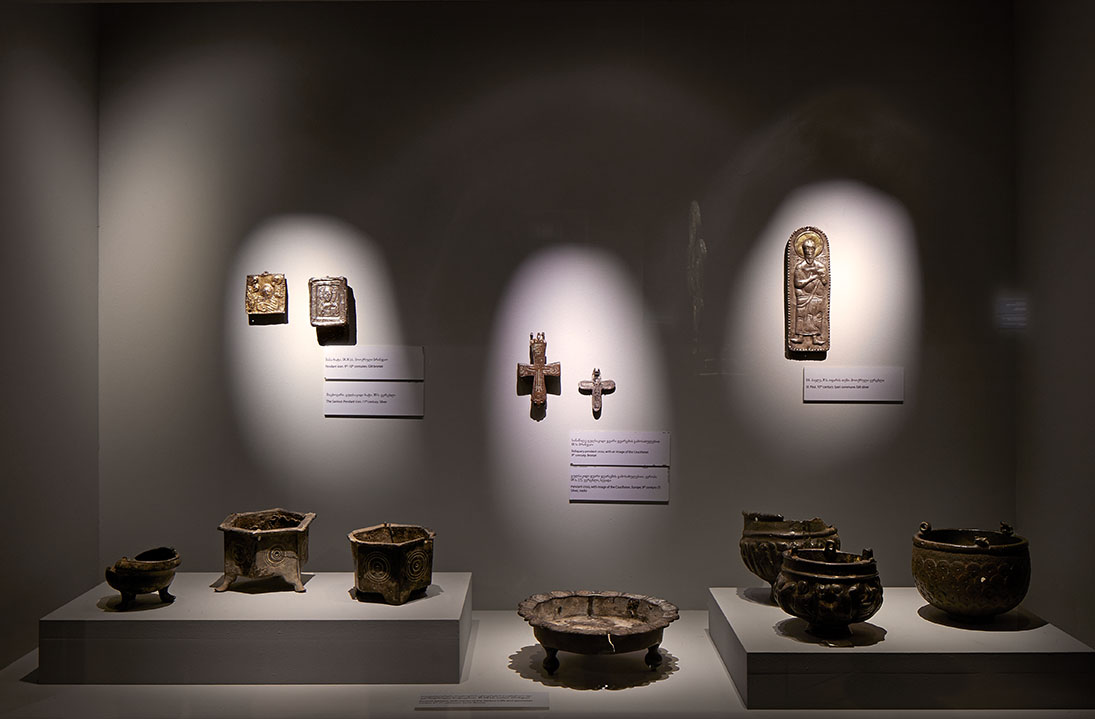 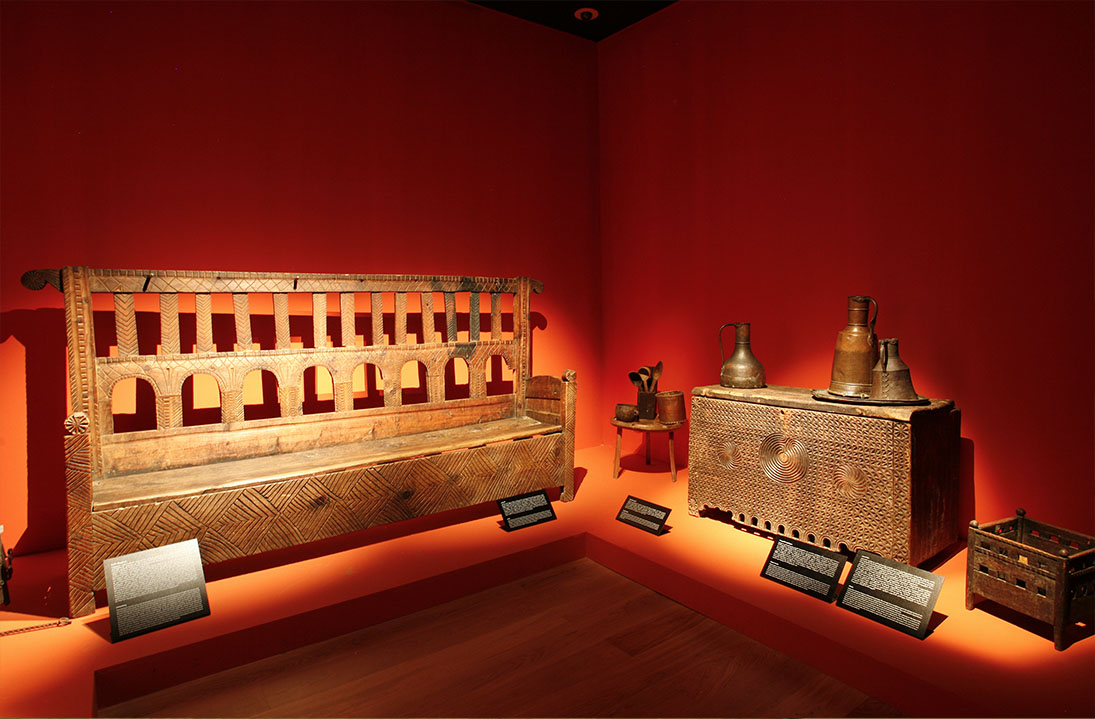 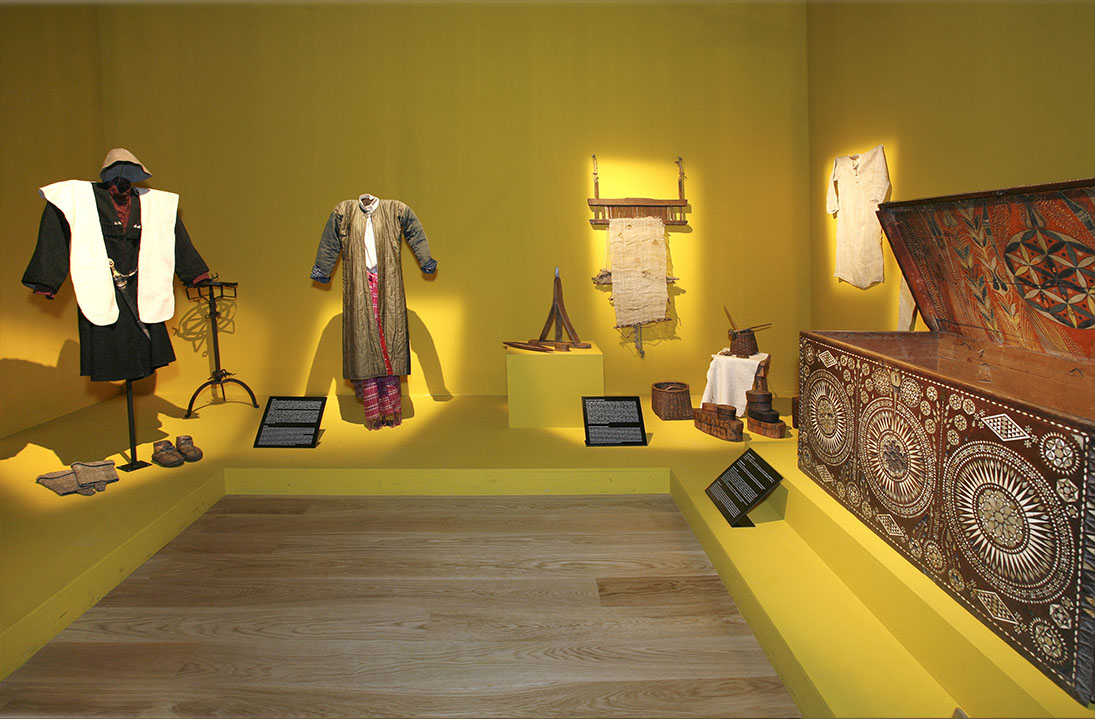 Svaneti Museum of History and Ethnography is located in north-western Georgia, in the recently-renovated capital city of the Svaneti region, Mestia. Museum was established in 1936 as a Local Museum. In 2013 the new museum was opened in modern building (architect Gaga Kiknadze) according to international standards. Now it makes possible to organize temporary exhibitions right next to museums unique permanent expositions, in a specially arranged space. In addition to all the facilities mentioned above, educational center and media library were open in 2015. During their visit, museum guests can enjoy cafe and bookstore. Our renewed public space is equipped with modern technology and makes museum more interactive for the visitors. The project of rehabilitation of Svaneti Museum of History and Ethnography was supported by Government of Georgia and different international organizations and funds, such as: The National Commission of UNESCO in Georgia, EU Twinning Program, the Prussian Cultural Heritage Foundation/Staatliche Museen zu Berlin, Smithsonian institution, US Ambassador's Fund for Cultural Heritage Preservation and with the help of the Italian and Swiss embassies. The renovated Svaneti Museum of History and Ethnography has become a 21st century cultural-educational center that also encourages scientific research and the education of future generations. *** The Museum's collections include important archeological and ethnographic materials, a rich collection of Georgian manuscripts, and Georgian Orthodox icons painted in the unique Svan style. It also houses ancient objects dating back to early empires and cultures that made their mark on Georgian history. Archeological discoveries made in Svaneti date back to the 3rd century BCE, and provide evidence of active cultural and social life, as well as connection to Kolkheti-the ancient land of the Golden Fleece encountered by the Argonauts. The archaeological collection contains many examples of ceramics, jewelry, cult or religious objects, armaments, trading instruments, and numismatic collections. The Svaneti numismatic collection is distinguished by its breadth. The majority of the coins represent the church-treasury. The chronology of the numismatic collection reserved in Svaneti begins with 5th century "Kolkhuri Tetri" and finishes with 20th century Soviet coins. Also notable are collections minted by Georgian monarchs David Aghmashenebeli, Giorgi III, Tamar, Giorgi IV, and Rusudan. The modern collection includes historic European currencies from Poland, Denmark, Germany, and the Czech Republic. Christian culture collections reserved in Svaneti include many significant Georgian middle century, Syrian, Byzantine, and European artworks. The majority of the museum icons are made by 11th century Svan masters in a style unique from elsewhere in the Orthodox world, and even from the rest of Georgia. Notable icons include Emperor Diocletian's Torture of St. George by the iconographer Asani, and Christ Pantokrator, painted by Giorgi and Tevdore. There are many "capital city school" and folk master's artworks among the unique Georgian painted icons in Svaneti. There are distinguished relic rooms representing chased/painted icons in the museum. Among them are the Jvartsma (11th-12th century) icon, and an icon donated by the nurse of Queen Rusudan, Silkhan. The museum collection in Ushguli also includes diverse objects such as 6th Syrian bronze censers, a13th century Venetian altar cross known as the "Lataijvari," 13th century Italian medallions, and 14th century German wooden glass. The manuscript archives include medieval ecclesiastic manuscripts written on parchment and paper, palimplsestic papers, and illuminated manuscripts: 5th century judgment from Jerusalem, liturgical and hymnographical collections from the 5th-6th centuries, 14th-15th century documents written on wood, and books printed between the 17th and 19th centuries (among them the 18th century "Tueni" printed in Erekle II's printing-house) are presented in the manuscript collection. Traditional Svan life is represented through 19th century photos, Svanetian domestic items, economic and battle instruments, jewelry, and the towers standing in Mestia and Ushguli. The GNM is not only the administrative overseer for this museum and its collection, but is also responsible for this region's magnificent architectural treasures. The village of Chajashi with its outstanding towers and castles is recognized by UNESCO as a World Heritage Site and is a part of the GNM Open Air Museum. *** Museum Educational Center aims to promote Georgian culture, heritage, art and science among local and international visitors. Educational programs provided by the newly opened center will include excursions, games, public lectures, meetings with scientists and researchers, movie screenings, performances and many other activities. Museum provides wide range of programs that are designed for the whole family, including educational programs for children and teenagers under 17, also activities for students of different sport-schools and camps. With the support of Mestia Municipality, students from the different schools of the mountainous regions will have a chance to participate in the programs. Excursions and field trips will also take place with the aim of introducing participants to the local history, traditions, ecology, flora, fauna and cultural heritage. Besides deepening general knowledge, informal environment provided by the museum educational programs will help participants develop skills such as - imagination, concentration, independent thinking, critical analyzing and communication. At the Georgian National Museum we aim to turn museums into a space providing inspiration and positive emotions in visitors, to deepen interest and creativity, to support perception of the world and reinforce consciousness. Media Library is a modern interactive space where visitors will be introduced to the latest literature and will have an opportunity to use free Wi-Fi. For the local residents and tourists the Georgian National Book Centre supplied Svaneti Museum's reading space of the Media Library with more than 200 books. The books published by research institutes and Georgian publishers are intended for the people of various interests and age groups. Media Library will help the population of mountainous region to access the latest literature. Georgian National Book Centre and The Georgian National Museum would like to express gratitude for the help to the G. Leonidze Museum of Georgian Literature, G. Chubinashvili National Research Centre for Georgian Art History and Heritage Preservation, National Centre of Manuscripts, The National Parliamentary Library of Georgia, Bakur Sulakauri Publishing, publishers - Artanuji, Intelekti, Saunje, Bakmi, Shemetsneba and Palitra L.